Hail causes millions of euros in damage in the southern parts of the Netherlands. 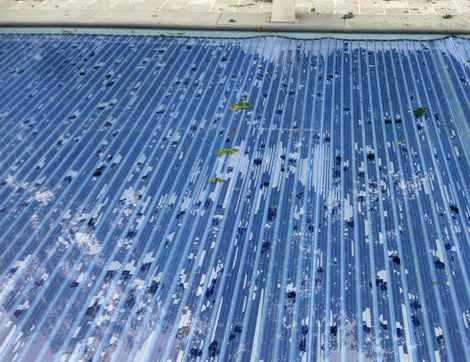 ONE OF THE MANY NEWSPAPER HEADLINES ABOUT THE EXTREME WEATHER CONDITIONS IN JUNE 2016: THERE IS ENORMOUS DAMAGE TO CARS, CARAVANS, ROOFS, CONSERVATORIES AND THE GREENHOUSE HORTICULTURE SECTOR. BUT THESE SUMMER HAILSTORMS CAN ALSO CAUSE DAMAGE FOR OWNERS OF SWIMMING POOLS THAT INCLUDE A SLAT COVER.

In the Netherlands, a summer hailstorm with stones that are 2 cm or more in diameter occurs in many parts of the country, on average five times per year. Almost every summer, even larger hailstones come down locally. Due to their weight, large stones are more dangerous than small ones. In addition, they impact at a faster speed. Spherical stones of 3 cm achieve a speed of 50 km/h; 6 cm stones weigh about 100 grams and come down at 120 km/h and larger stones can achieve a speed of 300 km/h. Imagine what impact that has on your slat cover!

We learned from querying a number of big insurers that a swimming pool cover is still insured on condition that it is included in a fire insurance policy. Roller shutters, which were not rolled up on time during a severe hailstorm, are still insured.

The question is whether this will remain as it is. The climate changes rapidly and who knows what insurers will decide in the future?

Based on data from 2000 through 2013, it is clear that storms, hailstorms and extreme rainstorms cause the most weather-related damage. Interpolation of this analysis to the scenarios of the Royal Netherlands Meteorological Institute (KNMI) provides a clear picture of the expected damage caused by climate change. Most important conclusion: without measures, the damage caused by hailstorms / extreme hailstorms is expected to double. In the most unfavourable climate scenario, the damage from precipitation (rain and hail) will increase by 139%.

The KNMI scenarios do not provide exact figures about the increase in hailstorms. However, the institute states that hailstorms will occur more frequently in the future. The KNMI expects that extreme hailstorms in 2050 will occur twice as many times as in the period 1981-2010.

Insurers in other European countries (e.g., the insurers in Switzerland) have already taken measures to restrict the extremely high damage claims. These insurers set requirements regarding the quality of the basic material and the end-product for the different product groups, such as roller shutters, roofs and façades.

These product groups also include slat covers for swimming pools. An independent testing institute carried out hail tests on covers: ‘bullets’ of different sized were ‘fired’ onto the frozen slats at a speed of 110 km/h. Based on these tests, it issued a Hail-Resistance Class that is included in a public hail register. Insurance companies prescribe which Hail-Resistance Classes will be insured and which ones will not be insured. Private individuals and companies can peruse this prior to purchasing a product. Click here for more information.

RECENTLY, THE POLYCARBONATE TRI-EXTRUSION SOLAR SLATS OF (RE)COVER WERE INCLUDED IN THIS HAIL REGISTER WITH THE HIGHEST POSSIBLE SCORE OF HW5. THIS MEANS THAT THESE SLATS WILL NOT SUFFER FUNCTIONAL DAMAGE IN CASE OF 5 CM HAILSTONES. IN ADDITION TO HAIL RESISTANCE, THESE SLATS ALSO ACHIEVED A VERY HIGH SCORE FOR UV RESISTANCE. FOR MORE INFORMATION ABOUT THIS NEW GENERATION OF SLATS, PLEASE CONTACT (RE)COVER BV.

A swimming pool cover instantly saves energy and this contributes to a reduction of the CO2 emission. Covering the water surface reduces the loss caused by evaporation to nearly zero. The result is that the chemicals stay in the water. Covering with a well insulating cover also decreases convection & radiation losses. Solar slats emit solar heat to the pool water and this is pure energy savings. (Re)Cover supplies mainly covers made from polycarbonate, one of the most sustainable types of plastics.

Local passion, global ambition. Sales and production take place in Waalwijk, the Netherlands. That’s where we produce tailor-made swimming pool covers made from synthetic profiles and according to the customer’s requirements. The covers are delivered worldwide from our warehouse.

Slats for swimming pools: nothing more, nothing less. Focus: (Re)Cover focuses solely on the development, production and supply of swimming pool slats, preferably made from polycarbonate. No compromises on quality. The difference is visible in the details. Each slat is inspected for dimensions, sealing and aesthetics. That’s how we guarantee a reliable and genuine product.

A motivated core team with more than 25 years of experience in the swimming pool market. Focus on the production of slats for swimming pool covers. (Re)Cover is the perfect partner for skilfully producing, delivering and installing slat covers in the Netherlands and abroad. Furthermore, (Re)Cover maintains unique collaboration with extrusion companies, cover producers, installers and other swimming pool professionals. Each associate adds its own expertise and extras to the product and that transforms synthetic profiles into a beautiful swimming pool cover.